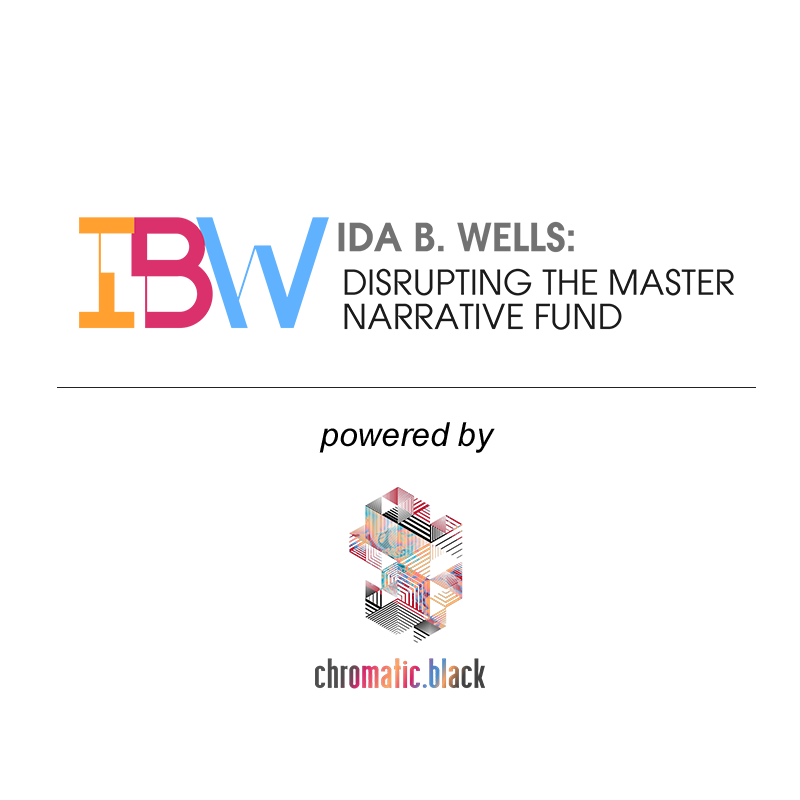 ATLANTA - WisconsinEagle -- chromatic black™ launches Season Two of the Ida B. Wells Fund and calls for entries in short filmmaking and two new categories – visual arts and creative placemaking. This season, the fund expands to offer awards ranging from $1,000 to $25,000 in three categories—short-form filmmaking, creative placemaking and visual arts.

Ida B Wells Fund competition is open to storytellers whose original work explores the spirit of exploration and deepens our collective literacy.   Here are key dates for the fund.

Ø  The Creative Placemaking Fund will support four creative placemakers at $25,000.  Creative placemaking making applications open on October 1.  The deadline for submission is December 1. Winners will be announced on February 14th, 2022.

The Ida B. Wells Fund partners with artist - activists across a spectrum of creative disciplines.  This year, the fund has two new developments – a new curatorial leadership of chromatic black™'s Artistic Director, Jessica Green and three categories—short-form filmmaking, creative placemaking and visual arts.

"We are equity architects. We are building cultural power by partnering with dope artists, creative teams and communities. For impact investors, we tie up the messy middle  connecting folks to the next wave of Black smarts, creativity, vision, grit, and determination" says Angela Harmon, co-founder and an Emmy-nominated storyteller, filmmaker, and creative director chromatic black™.

The award recipients will be chosen by an interdisciplinary panel composed of expert curators, filmmakers, producers, other arts professionals, scholars and winners from last  year in a thorough, multi-step review process.

Ida B. Wells Fund Expands To Include Visual and Creative Placemaking

In addition, the Ida B. Wells Fund will expand to visual arts and creative placemaking.

"Not only are artists producers of aesthetic objects and creators of experiences, they help to make places healthier, more equitable, and sustainable," said Artistic Director, Jessica Green. The expansion of the fund to include creative placemaking is an acknowledgment of creativity as a radical act of resistance."

Black placemaking is a reclamation of space rooted in remembrance. The fund acknowledges this praxis of remembrance, reclamation, and renewal as a creative act of resistance. The fund will partner with cultural bearers fortifying our participation in the public commons.

Visit the Ida B Wells Fund  to apply and for additional updates.

About Ida B. Wells Fund

More on Wisconsin Eagle
The Ida B. Wells Fund honors the legacy of a trailblazing American investigative journalist who chronicled the horrific violence of lynching against African-Americans in the 19th and 20th century.

The Fund under the curatorial leadership of chromatic black™ Artistic Director Jessica Green provides up to $25,000 in project investment, supplemented by additional development services for original, groundbreaking work.

chromatic black™ support projects that are reflective and illustrative of the theme of disrupting the master narrative.

chromatic black™ is a collective of 10,000 +/- artist-activists across a spectrum of creative disciplines. our vision -  is the reclamation of STORY as a public common.  At the core of our vision is a deep and firm commitment to knowledge as a means of building cultural power and advancing transformative justice.

Our mission is the disruption of the master narrative with good storytelling. We understand the master narrative as structural violence in all of its many mutations.   We are storytellers and we use our artistic platforms – art, education, film, television, live and digital entertainment – to bring about cultural change, utilizing movement intelligence to disseminate unifying narratives to combat structural violence.

By amplifying pathbreaking, innovative perspectives on equity and intergenerational well-being, we seek to introduce counter-narratives to the conventional perspectives that normally dominate mainstream airwaves.