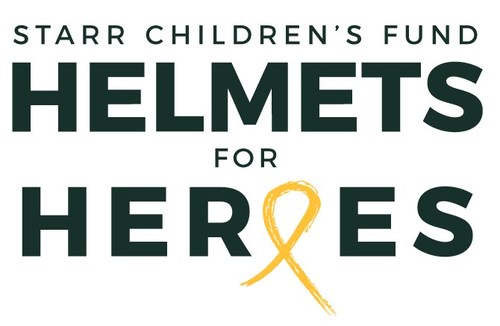 MILWAUKEE, Sept. 23, 2021 /PRNewswire/ -- September is Childhood Cancer Awareness Month and all 32 starting NFL quarterbacks have put their signed helmets up for auction to help raise money for pediatric cancer research and care.

Football fans can bid on their favorite NFL quarterbacks' helmets through the Helmets for Heroes auction on eBay for Charity Sept. 23-30. Money raised will benefit the Starr Children's Fund, which supports research efforts to impact the lives of pediatric cancer patients.

In addition to the signed helmets, mystery boxes are also available for purchase on the eBay for Charity website. Each mystery box includes sports memorabilia and one signed item from an NFL player.

After learning that only 4% of the billions of dollars spent annually on cancer research and treatments benefit childhood cancer research, legendary quarterback Bart Starr and his wife, Cherry, established the Starr Children's Fund in collaboration with the Vince Lombardi Cancer Foundation (VLCF). To date, the Starrs have contributed to raising more than $16 million to help fight cancer.

More on Wisconsin Eagle
"Bart's and my hope was to see our country's precious children receive cancer care and treatments designed for them," said Cherry Starr.

Before he passed away at the age of 85 in 2019, Bart Starr used to write letters at the beginning of the season to every quarterback in the league wishing them good luck. He called them his 'kick-off notes.'

"In honor of Bart's annual 'kick-off' notes, I wrote a letter to every starting quarterback in the NFL asking for their help in our Helmets for Heroes auction," said Cherry Starr. "We had an overwhelming response, and for the third year in a row, I couldn't be more excited that all 32 quarterbacks are participating."

For more information about Helmets for Heroes, the Starr Children's Fund and VLCF, visit lombardifoundation.org/helmetsforheroes.

About Starr Children's Fund
Bart Starr's legacy on the football field matched his charitable legacy. After Coach Vince Lombardi passed away from colon cancer in 1970, Bart and Cherry Starr graciously accepted the role of honorary chairpersons of the first annual Vince Lombardi Memorial Golf Classic and served the Vince Lombardi Cancer Foundation for 44 years. They contributed to raising more than $16 million to help fight cancer. In 2017, in collaboration with the Vince Lombardi Cancer Foundation, they introduced the Starr Children's Fund, which is dedicated to raising funds to support pediatric cancer research and treatment.