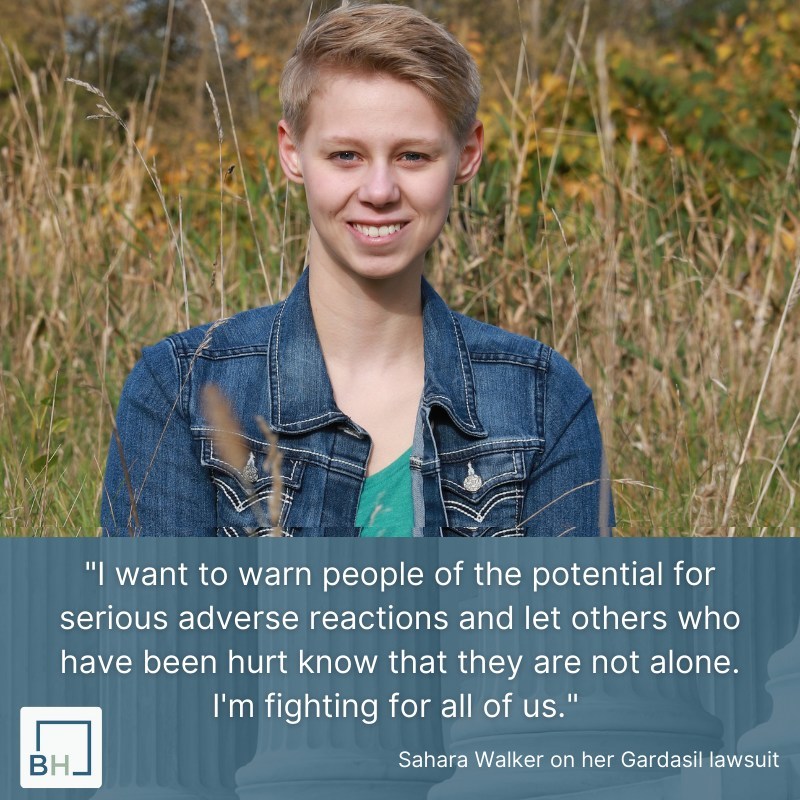 MADISON, Wis., Nov. 18, 2020 /PRNewswire/ -- Gardasil attorneys from the national law firm of Baum Hedlund Aristei & Goldman filed a lawsuit against Merck on behalf of a young woman who alleges she developed Postural Orthostatic Tachycardia (POTS) and a host of other serious injuries after receiving the human papillomavirus (HPV) vaccine.

The plaintiff in the case, Sahara Walker of Lake Mills, Wisconsin, received the Gardasil vaccine when she was just 11 years old. She spent the next five years being severely disabled and unable to attend school or participate in activities she once enjoyed. Though still very disabled at the age of 19, special infusions now keep her out of bed and able to walk and even mountain bike.

The lawsuit (case no. 3:20-cv-01048) includes allegations of negligence, failure to warn, and manufacturing defects, among others. According to the complaint, Merck knew or had reason to know Gardasil is defective and ineffective, but instead of warning consumers about the dangers, the company wrongfully concealed information and further made false statements concerning the safety and efficacy of Gardasil. Ms. Walker is seeking punitive damages against Merck for creating a substantial risk of significant harm to children and patients who were injected with the Gardasil HPV vaccine.

"Merck is using the same development and marketing playbook for Gardasil that it used when it promoted Vioxx as a headache pill knowing it caused heart attacks" says co-counsel Robert F. Kennedy, Jr. "Vioxx killed hundreds of thousands of Americans and Merck paid $7 billion in penalties and damages and agreed to stop falsifying science. Sadly, Merck learned no lessons. Falsifying science, defrauding regulators and injuring and killing its customers is the only business model this company knows.

Merck utilized all the same strategies to sell Gardasil to our children. The company has sickened an entire generation. The list of casualties and grim injuries continues to multiply. This company is beyond shame or redemption."

"Data suggests Merck presented regulators with false information about the link between HPV and cervical cancer, which helped give them a runway to fast-track this dangerous vaccine over a matter of six months," says attorney Nicole K.H. Maldonado. "Merck to this day has never properly tested Gardasil to ensure it is safe, and now Sahara and countless others are suffering from debilitating injuries. We will hold Merck accountable for the harm the company has caused."

Sahara Walker was 11-years-old when she received her first and only shot of Gardasil on September 25, 2013, per her doctor's recommendation. During the same doctor visit, she also received the Tdap vaccine and the meningococcal conjugate vaccine.

Before receiving the HPV vaccine, Sahara had no autoimmune diseases, no autonomic issues, and no orthostasis. A happy, healthy young girl who had just scored in the top 97th percentile of all Wisconsin students in math, Sahara consistently performed well academically, participated in sports, and was active socially with her friends and peers. She was a "mathlete" and had been on the math team for two years, won tournaments and advanced to State, but was not allowed to attend as she missed too many days of school due to her Gardasil side effects.

Sahara's mother, Mrs. Melissa Roglitz-Walker, wanted her daughter to get the Gardasil vaccine after seeing marketing from Merck maintaining that Gardasil was very safe and prevents cancer. She thought she was being a really good, responsible parent.

Two days after receiving the Gardasil shot, Sahara began to experience vomiting and headaches. One week later, on Oct. 3, 2013, she began to experience severe body aches to go along with the vomiting and headaches from the week prior. She soon had fevers and began excessively sleeping, reporting extreme fatigue while awake. She was also dizzy, weak, and pale. Within a month after the shot she was bedridden, and wheel-chair bound if she had to be transported.

As weeks became months, Sahara's symptoms and injuries continued to worsen. She was seen by multiple physicians and specialists to treat her growing list of symptoms, including daily migraines, severe body aches and pain, and cognitive impairments, among other issues. With little to no relief from her symptoms, Sahara was unable to engage in the activities she had enjoyed before receiving the Gardasil vaccine.

In 2015, Sahara went to 54 doctor appointments. A year later, her medication regimen was up to 55 pills per day. Due to her symptoms, Sahara was no longer able to attend school in the same manner she did prior to her Gardasil injection. She was homeschooled through the majority of 6th through 12th grades, mostly bedridden and confined to a wheelchair.

Today, Sahara takes 14 prescription medications. She also receives a very expensive Intravenous Immune Globulin (IVIG) treatment at home every three weeks through a central line in her chest. If the IVIG treatment ceases to be administered at these regular intervals, she experiences a dramatic decline in her health to the point of becoming severely disabled again.

IVIG is a blood product prepared from the serum of between 1,000 and 15,000 plasma donors per batch that floods Sahara's system with good antibodies to overrule her own bad antibodies that are attacking her own body. When Covid-19 began to ravage the country, some healthcare professionals turned to IVIG as a treatment option, leaving many people with Gardasil vaccine injuries worried about IVIG supplies running low.

"In speaking with other parents of Gardasil-injured children, I can tell you there is a lot of concern regarding a possible IVIG shortage in the near future," says Mrs. Roglitz-Walker. "It would be devastating for my daughter and for anyone with Autoimmune Autonomic Neuropathy, Small Fiber Neuropathy, POTS, dysautonomia, and other neurological conditions who need this treatment just to keep them from being bedridden."

Sahara Walker seeks to hold Merck accountable for its negligent, reckless, and fraudulent conduct, and for the physical and emotional injuries she sustained after receiving the Gardasil vaccine.

Before Merck brought Gardasil to market, the company negligently designed and conducted clinical trials to prevent the clinical trials from revealing the vaccine's true risks, including autoimmune diseases, the lawsuit alleges. Furthermore, the complaint alleges that Merck knew or should have known that its poorly designed clinical trials and studies were insufficient to test Gardasil's true long-term safety and efficacy.

According to the complaint, Merck also purposely downplayed Gardasil's dangerous and undisclosed ingredients, including:
Attorneys representing Sahara Walker further allege that Gardasil contains a secret DNA adjuvant and potentially hazardous ingredient designed to make the vaccine more potent. Merck allegedly used the DNA adjuvant to prolong Gardasil's immunological effects but illegally omitted it from its list of substances and ingredients in the vaccine.

If Merck had provided adequate and truthful warnings and properly disclosed and disseminated the true risks, limitations, and lack of efficacy associated with Gardasil to medical providers, patients and the public, Ms. Walker's medical providers would never have offered or recommended the Gardasil vaccine, and Ms. Walker would never have suffered the disabling physical and emotional injuries she continues to endure.

Statements from the Plaintiff and Her Mother

"My injuries from the Gardasil vaccine have stolen so much from me. Before the vaccine, the possibilities for my future were endless. Now, my life is full of accommodations and medical interventions. It's not how any 19-year-old should have to live.

I want to warn people of the potential for serious adverse reactions and let others who have been hurt know that they are not alone. I'm fighting for all of us." – Sahara Walker

Pharma companies that develop vaccines should not be allowed to police themselves and cherry pick their own data to mislead the FDA and the public about the safety and efficacy of their vaccines. It's imperative that there be more robust checks and balances as well as increased transparency in order for the medical community and the public to make genuinely informed decisions. Only then will be able to truly protect the lives of our children."
– Melissa Roglitz-Walker

About Baum Hedlund Aristei & Goldman
Baum Hedlund Aristei & Goldman is one of the nation's leading law firms representing individuals harmed by the Gardasil vaccine. The firm has a long track record of success holding pharmaceutical and chemical companies accountable. The firm co-led two of the Roundup cancer trials against Monsanto, obtaining in 2019, a $2 billion verdict on behalf of Alva and Alberta Pilliod, which was the second highest verdict in the nation and the ninth largest in U.S. history.

Our firm wishes to stress that we are not against vaccines. They have the potential to eradicate disease and save millions of lives. We are, however, against intentional efforts to mislead consumers about the safety and effectiveness of a drug or vaccine. Our firm has always fought—and will continue to fight—for the rights of consumers to be fully and honestly informed about risks associated with any drug, vaccine, chemical, medical device, or consumer product. We will work tirelessly to ensure those rights are defended and victims of injustice are compensated for their injuries. Gardasil makes good vaccines look bad.